Owning or renting a home in the Caribbean would be a dream come true for most island lovers. Our specially selected properties in Barbados all have one thing in common – that all important wow factor

Few could argue that the Caribbean has fantastic amenities with its golf courses, spas and world-class restaurants. Many parts of it, including Barbados, have direct flights from major cities and of course the climate and beaches are superb.

The focus of developing the real estate market in Barbados came about due to a variety of factors. With its traditional sugar cane industry in steep decline, the island began to rely increasingly on tourism and overseas property buyers to support its economy.

Founded in 1952, Realtors is Barbados’ most longstanding real estate company, family run since its inception. Suzanne Davis of Realtors says, “Although Barbados is still experiencing a somewhat depressed market we have luckily not seen the tumultuous market drops as many other countries worldwide have. Over the last winter many high-end residences were sold island wide and we have begun to see a slight upturn through the summer. It’s a bit too early to say for sure if this is a trend but we remain positive and look forward to a prosperous winter season to come with many winter-sun seeking visitors coming to our beautiful island during the peak winter months.”

Kieron Kelly, chairman of Barbados estate agents Chestertons, reports that the Barbados tourism market is thriving at the moment, retaining its position as the number one ‘luxury’ tourism destination in the Caribbean. “Naturally this has led to a positive impact on the property market,” he says, “which explains why there has not been the large price reductions in property on Barbados as experienced elsewhere in the world. Key locations such as the west coast and beach front areas have declined only slightly in the last few years.”

The new Limegrove Lifestyle Centre at Holetown is proving a great addition to the island and is becoming a real hub of activity both in the day and evening. “The cinema opening and the new restaurants and bars draw about 200 people every night,” says Mr Kelly, “whilst the designer shops, gourmet sandwich bar and coffee bars are popular during the day.”

While Chestertons has found that the US market has reduced, except for the ultra-high end, the Canadian market has opened up because of the similar banking system and double taxation agreements. “There has recently been an increase in the Russian market but the UK is still the primary market representing 85% of buyers,” says Mr Kelly.

“The condo market has diminished as people are now looking for more square footage and value. They tend now to be looking for something more substantial for their money (eg own swimming pool rather than a shared one at a luxury condo). The English prefer a substantial home with garden and swimming pool, and are willing to wait and negotiate for it. People are thinking that if you’re going to pay $1.5 million for effectively a town house then you may as well negotiate for a larger detached home.”

This five-bedroom, five bathroom villa has an 8,000 square feet layout on a private 44,563 square feet plot with fabulous fairway and ocean views. It features expansive open plan rooms, a spacious deck and infinity edge salt water swimming pool. The house has a Zen fusion style which can be characterised as relaxed, soft and modernistic, and this is accentuated with a tasteful tropical flair both inside and out.
£3.11m / €3.87m / $4.995m
Aylesford: +44 (0) 20 7349 9772 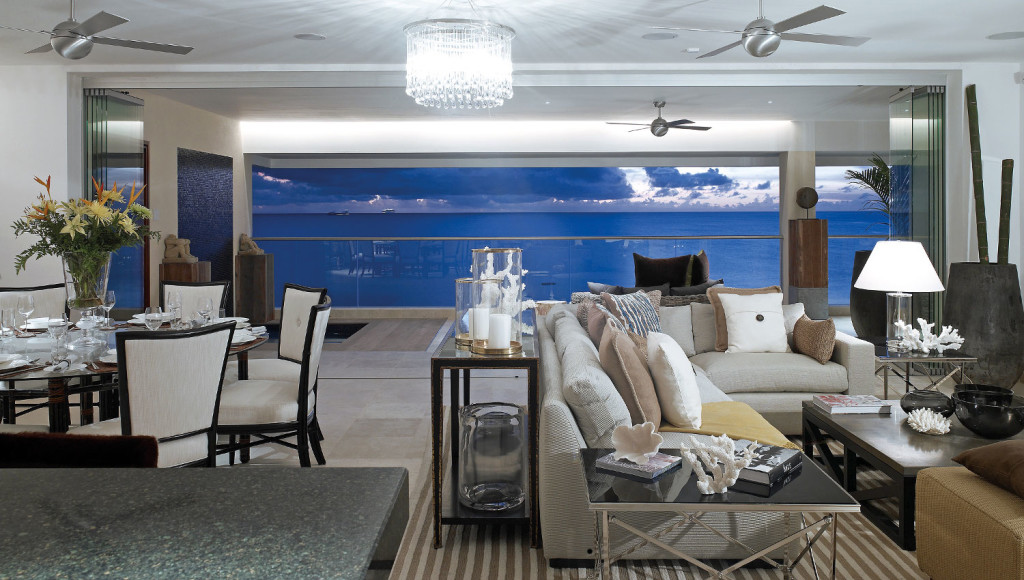 A ‘mega apartment’ offering 10,000 square foot of magnificent living space, making it the largest apartment ever on the West Coast of Barbados. Merging the interior living space with the property’s stunning environs, it features six spacious bedrooms with two master suites, each with an expansive private terrace overlooking the Caribbean Sea. The living room spans over 60 feet, opening on to an 80 foot wide terrace with two mirrored plunge pools and an uninterrupted view of the coastline. There’s a gourmet kitchen plus a second kitchen area that can be easily converted to an entertainment bar. 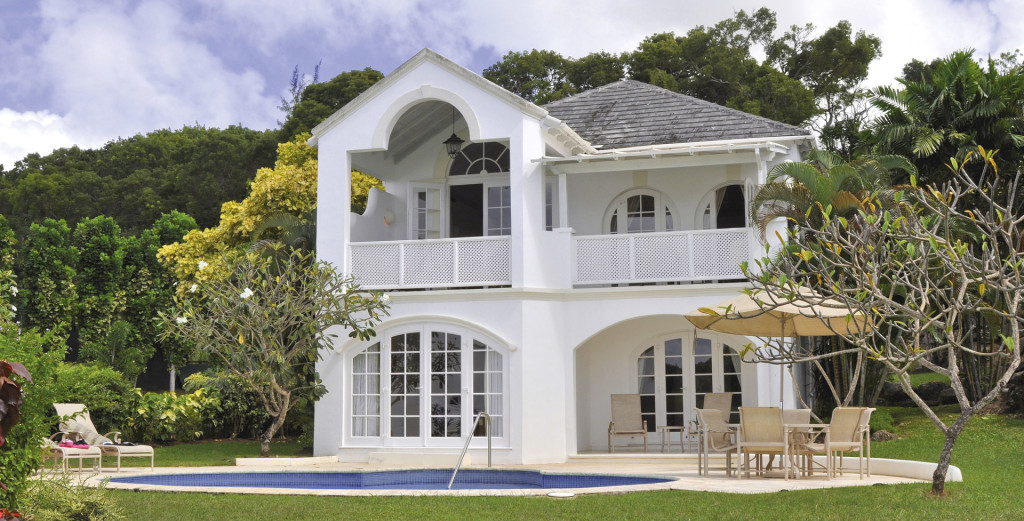 Previously owned by ex-England cricket captain Michael Vaughan, this three-bedroom detached villa has 2,520 square foot of living space. Fully furnished, it includes an open plan kitchen, dining and living room leading directly on to a wide balcony on the upper floor with views over the communal infinity pool and the resort. The three en suite bedrooms are located on the lower level while outside there’s a large family sized pool. Bordering the golf course, other features include high vaulted pickled pine ceilings with ceiling fans, shell stone floors, coral stone finish on the interior walls, double car parking and golf buggy parking facilities.

Historic traditional plantation estate with authentic windmill. It comprises a plantation house, apartment building and manager’s house within 140 acres with spectacular views of the south coast of the island.

The coral stone plantation house was built in 1721 and has a two-car garage and a swimming pool with gazebo. It covers approximately 9,000 square feet and includes four bedrooms, four bathrooms, living room, dining room, kitchen and bar. The two-storey apartment building is just over 3,000 square feet and has one two-bedroom/one bathroom apartment on the ground floor and one two-bedroom/two bathroom apartment on the first level. The manager’s house is a single storey, split level home with three bedrooms.
£6.86m / €8.5m / $11m
Realtors: +1 246 432 6930 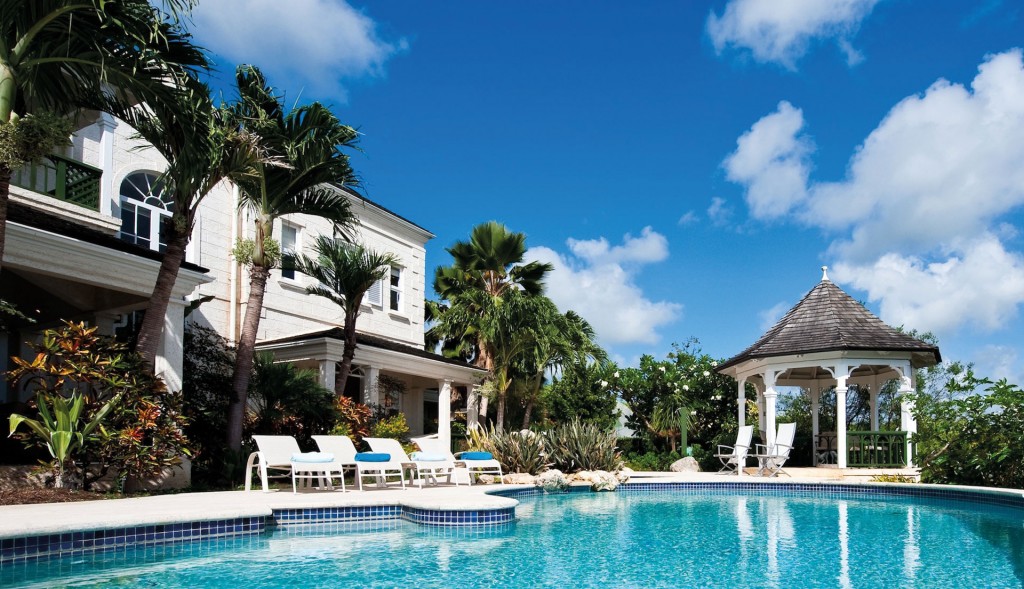 Villa on the edge of a ridge on the West Coast within beautifully maintained, mature grounds. The property has five air-conditioned, en suite bedrooms – two in the main house and three other bedrooms in two adjacent cottages.

The entrance leads up to a porte-cochere where a wooden bridge goes to the main house or the cottages to the left of the house. The main house reception area features a beautiful staircase and chandeliers. Continuing through the villa, there is a spacious lounge, a dining room that can seat 12 comfortably and a well-equipped kitchen.

The patio area offers further comfortable seating and can provide additional dining for 14. An infinity pool with gazebo and jacuzzi overlooking an extensive view across country to the coast and ocean beyond complete this villa perfectly.
£5.6m / €6.97m / $9m
Realtors: +1 246 432 6930

Read the rest of the Barbados supplement in Volume 19 Number 5.